The Toronto Chinese Orchestra (TCO) is proud to announce a composition competition. This competition seeks to connect emerging Canadian composers with Chinese orchestral music in order to produce a new composition. Winning composer(s) will have their work premiered during the TCO’s 2017|2018 concert season, at their 25th Anniversary Gala Concert in June, 2018.

The competition is open to emerging Canadian composers (citizens or permanent residents). There are no age restrictions. Jurists, TCO artistic leadership, and TCO board of directors are ineligible to apply.

A jury comprised of TCO artistic leadership and international guests will judge the applicants based on their excerpt. The adjudication will be done blind: a number will be assigned to each application package, and jurists will not have access to applicants’ identifying features until after decisions have been made. Jury decisions are final.

Winner(s) will be announced in September, 2017, and will be commissioned to write a work of approximately 7-10 minutes for the TCO. The final composition will likely be based on the excerpt, although this is not absolute. The TCO will also work with winner(s) to write a commissioning grant, and will provide coaching from the jury throughout the compositional process. Scores and parts should be ready by March 1, 2018.

Commissioned pieces will be premiered at the TCO’s annual concert in June 24, 2018.

Completed application packages should be sent electronically to RNg@TorontoChineseOrchestra.com. Please include any audio/video as links to streaming sites (e.g., YouTube).

Score layout, tuning and ranges for the specified competition instrumentation 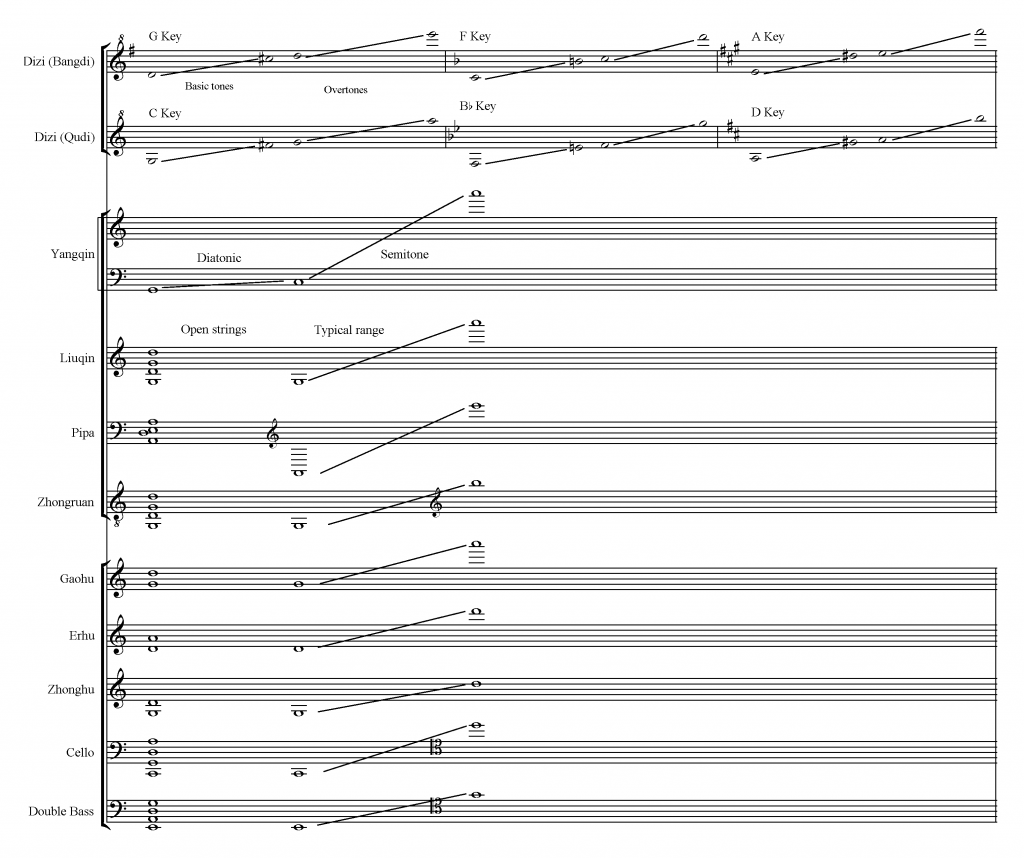 Elaine Choi contributes to Toronto’s vibrant choral community as a conductor, educator, and accompanist. She is currently Conductor of the Toronto Chinese Orchestra and Director of Music at the Timothy Eaton Memorial Church. As a music educator, Elaine works as a faculty member at the National Music Camp and as a guest coach at The York School and Rosedale Heights School of the Arts. Additionally, Elaine is the Co-Founder and Co-Conductor of Windago, an ensemble of wind instruments and SATB chorus.

Elaine’s early music studies began on the piano and violin. She is also proficient on the erhu. Elaine earned her BMus in Music Education (2008) and a MMus in Music Performance, specializing in Choral Conducting (2010) at the University of Toronto. She has also earned an ATCL (1999), an AmusTCL Diploma (2001) in Piano Performance from the Trinity College of Music, London, and an Advanced Certificate (2000) from ABRSM, England. She is a three-time recipient of the Elmer Iseler Fellowship in Choral Conducting (2008, 2009, 2014) and a finalist in the Sir Ernest MacMillan Foundation Fellowship Award in Choral Conducting (2012). In 2014, Elaine began her doctoral study in choral conducting at the University of Toronto under the tutelage of Dr. Hilary Apfelstadt. At the present, she directs the University of Toronto Women’s Chorus and serves as President Elect on the board of Choirs Ontario.

Matthew Poon is currently music director of the SCBC Chamber Orchestra and conductor of the Toronto Chinese Orchestra. Previously he served as assistant conductor of the Kindred Spirits, the McMaster University Choir and Women’s Vocal Ensemble. Matthew is currently pursuing a Ph.D. in music theory at the University of Toronto. He earned a bachelor of music from McMaster University, an ARCT in piano performance from the Royal Conservatory of Music, and master’s degrees in conducting and music theory from the University of Toronto. Matthew’s musical interests extend beyond conducting into composing and arranging, music cognition research, and teaching, where he maintains a studio both privately in Markham and with Arcadia Academy of Music in Richmond Hill.

Tony K.T. Leung is a Toronto based composer whose music has been performed and broadcast worldwide by leading contemporary music ensembles. Recordings of works by the composer include CD releases from Luxembourg Sinfonietta, ERMMedia, and Canadian Electroacoustic Community.

Lan-chee Lam is the winner of the prestigious award, Grand Prix of the 19th George Enescu International Composition Competition (Symphonic Section) in Romania, 2009. Her music often combines Chinese tradition and contemporary technique, exploring new dimensions of sound world. Born in Hong Kong, graduated from the Chinese University of Hong Kong (B.A.) and University of Toronto (M.Mus., D.M.A.), her works have been performed all over Asia, Europe and North America. She is currently appointed as the Composer in Residence at the Chinese University of Hong Kong and instructor at LCSD Advanced Music Composition Training Project.