The Toronto Chinese Orchestra’s Chamber Players (TCO-CP) form TCO’s professional core. Members of the Chamber Players have extensive musical training and are established artists and teachers in the community. Their experience as solo, ensemble, and orchestral musicians allow them to perform the most demanding repertoire at the highest levels. Together, musicians of the Chamber Players perform Traditional Chinese music as well as contemporary works by Canadian and international composers. They promote new music for traditional Chinese instruments through public performances, workshops, and demonstrations, both at home in Toronto and abroad.

As an integral part of the Toronto Chinese Orchestra, the Chamber Players enjoy multiple national and international connections, connections that have led to TCO collaborations with the Silk and Bamboo Festival in Vancouver (April 2017) and the Edmonton Chinese Philharmonic (October 2016), as well as partnerships and performances in Taiwan and Hong Kong. Future plans for the TCO Chamber Players include a return to Vancouver to collaborate with the Sound of Dragon Festival in April 2018.

The Chamber Players is led by Patty Chan, who concurrently serves as concertmaster of the TCO and is active as a freelance erhu performer and teacher. An authority on the erhu, Chan published the first English-language text, Bridging the Gap, in 2011, and has been on faculty at York and Carleton Universities. Chan’s passion for new Canadian works led her to form the Dim Sum Ensemble, a professional Chinese instrument ensemble dedicated to pioneering Canadian Chinese music. 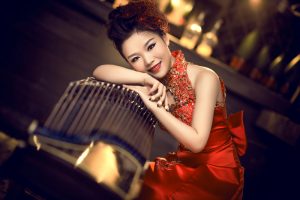 Lina Cao is a young guzheng musician and a member of the Guzheng Society of Chinese Musicians Association. Having learned guzheng since she was 5 years old, in 2008 Lina was accepted to the Nanjing University of the Arts as an “excellent student,” where she studied with Professor Aihua Yan and Associate Professor Jie Ren. From 2011, Lina pursued further studies with Professor Wang Wei from the Shanghai Conservatory of Music, earning a master’s degree there in 2016.

Lina has received popular acclaim throughout China both as a soloist and a chamber musician. She has been invited to multiple artistic exchanges in Germany, France, Belgium, Austria, Japan and Singapore, and had the opportunity to perform for world leaders during important events such as the “World Urban Forum” and the “Fifth EU-China Business Summit.” Invited in 2011 to the Sino-Japanese Friendship Concert, Lina was awarded an international gratitude certificate for “The Cause of World Peace.” In 2015, Lina won praise when she played the Chinese guzheng concerto “Qinhuai Capriccio” with Jiangsu Nationalities Orchestra; the performance was recorded live by The WFMT Radio the Network website from Chicago.

In addition to her work as a performer, Lina has released several papers in Chinese national journals such as “Yunshangsu Perfect Integration of Guzheng Technique and Emotion,” “Analysis of Guzheng Creation and Theory Taking Dark Angel as an Example,” “Music Performance Analysis of Polyphonic Guzheng,” all of which are collected in the China National Knowledge Internet. 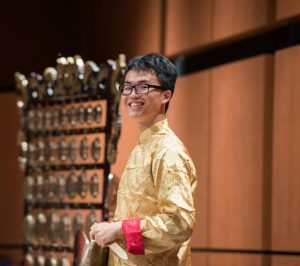 Kenny Kwan is currently a Masters student at York University studying composition, with a focus on the concept of silence. He completed his undergraduate degree at Wilfrid Laurier university in 2016, specializing in contemporary composition-improvisation on the piano.

With an interest in improvisation and traditional Chinese instruments, Kenny was a finalist in NUMUS’s Student Curator Contest proposing an East-West improvisational concert where musicians from both cultures can collaborate and explore new possibilities. He hopes to develop an environment in Canada that would nurture these two scenes and potentially open them into a wider range of audiences in the future. However, Kenny is currently focused on exploring how the concept of silence fluctuates in relation to the environment in which the listener is expecting to perceive sound.

Outside of music, Kenny enjoys reading, helping others, and daydreaming. 🙂

Wendy has displayed remarkable musicianship and a disciplined attitude since a very young age. She began learning the pipa at the age of five, and after her immigration to Canada in 2001, Wendy was honoured to have been accepted by world-renowned pipa virtuoso, Professor Guilian Liu, to be her personal student for over nine years. In 2007, when Wendy was still a high school student, she had already achieved, with distinction, the highest performance level in the Chinese Conservatory of Music Exam for pipa.

Wendy’s musical sense and articulation received high praise from local judges as well as abroad. Before her 18th birthday, she had already won over 20 awards with her outstanding pipa performances. These include the S.K. Lee Scholarship for being the top performer across all Chinese instruments at the Vancouver Kiwanis Music Festival, third place in the Kiwanis Gala Concert where she competed with both western and eastern instrumental finalists, as well as a province-wide award at the Youth Pipa Competition in Suzhou, China.

Wendy joined the B.C. Chinese Orchestra in 2002, where she served as the section leader. In 2010, after moving to Toronto, she joined the Toronto Chinese Orchestra. In the same year, she co-established the fusion band, Spire, and began to explore the boundary of eastern and western music through rearranging and composing multiple pieces for the group. Wendy currently also teaches pipa privately and at the Music of May music store.

Bobby was first introduced to the drum kit in 2012, and eventually became obsessed with drumming when he began forming his own bands and participating in extra-curricular music ensembles. Since then he decided to supplement his musical horizon by composing and arranging music for percussion ensembles, orchestras, choirs, symphonic bands, and his personal rock bands. Although he has been attending Chinese music concerts since he was a child, Bobby did not become actively involved in Chinese music until 2012. That year he joined the Apex Martial Arts Academy in Toronto to learn wushu and sanshou, not knowing that this is where his journey as a Chinese percussionist would begin. The martial arts school had a drumming ensemble called the Apex Drumming Team, a group of youth that specialized in lion dance drumming.

After witnessing the ferocity of the drumming team through shared community performances with the TCO Bobby was invited to join the TCO not as a performer, but as a composer. He debuted his first composition for Chinese drums, Legend of Jade Dragon, in 2013 with the TCO percussion ensemble. Since then, he has been performing with the TCO and has been appointed the section principal for their percussion section. Bobby’s musical interests have shifted from the Western drum kit to Chinese orchestral and percussion music. He has arranged collaborations between the TCO and the Apex Drumming Team to perform his second composition, Wild Game, and renowned Chinese percussion songs, such as Flying Dragon Leaping Tiger, and Emperor Qin Musters Army. Bobby was invited to Taiwan as a soloist to collaborate with the Taoyuan Chinese Orchestra in the Taoyuan Chinese Music Festival in the summer of 2018.

Despite his obsession with music, Bobby earned his master’s degree in Professional Education, specializing in Applied Behaviour Analysis. In addition to teaching drums part-time, his professional life involves working with individuals diagnosed with autism as a behaviour therapist. Occasionally, these two worlds meet and Bobby welcomes children with autism who want to learn drums.