Unfortunately, due to unforeseen circumstances, Teik Chuan Lim will no longer be able to perform in the Butterfly Lovers Concert on June 9th. However, we are delighted to announce that Vivian Yang Li will take his place. 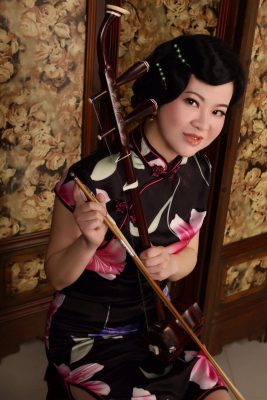 Yang Li (Vivian) was born in Shanghai and grew up in Wuxi, hometown of the Chinese erhu master Abing, and a very musical city in China. She was raised in an artistic family and has played violin and erhu, the Chinese two-string violin, since age six. At 18, she started her studies in erhu performance at the Arts University of Nanjing. She obtained a master’s degree in 2003, and then served as concertmaster for the Jiangsu Chinese National Orchestra.

Afterwards, Yang Li was actively involved in performing, teaching, as well as in promoting and managing various cultural activities. As a member of the Chinese Society of National Instrumental Music, she has produced a music program with Lyon’s TV Station. The mayor of this city said of her: “she is a cultural envoy of East and West, an artist who speaks with the world through Erhu.”

Yang has also presented many erhu workshops in schools and the libraries. She is one of the few professional erhu soloists recognized in Montreal. Yang finds great pleasure in playing erhu with musicians from different cultural backgrounds.

We look forward to working with Yang to present Butterfly Lovers Erhu Concerto to you on June 9th. Come and meet her at the Workshop on June 8th!