Among our guests are the Tsinghua Alumni Performing Arts Group (TAPAG) choir, directed by Ms. Hongmei Cai. Founded in 2008, they are a registered non-profit organization comprising of Tsinghua University alumni with a passion for performing arts. TAPAG’s mission is to promote and organize social and cultural activities among Tsinghua alumni, Chinese communities and the multicultural Canadian society, particularly in the Greater Toronto Area. Having grown into more than 50 registered members, they have formed a choir, a dance troupe and a folk arts group. Most of the members were leaders in arts and sports while at school and are now working professionals who share their passion and dedication in building community through performances at nursing homes, festivals, celebrations, and many other multicultural events.

Ms. Cai’s performing career began at age 12 when she participated in China National Radio Children’s Choir. Since then, she has been actively studying and leading in vocal music. During her 5-year study at Tsinghua University (Electronic Engineering), she was principal soprano in the Tsinghua University Student Choir. Upon graduation, she joined the Beijing Female Choir as solo soprano, lead singer, and performed in Beijing Opera Concert Hall, City Hall Theater, CCTV/BTV, and radio programs. After moving to Toronto in 1997, Ms. Cai volunteered as board member of the Tsinghua Alumni Association, founded the Tsinghua Alumni choir and served as head of choir, music director and conductor. Apart from leadership roles, Ms. Cai is a soloist, actively performing in concerts and events. 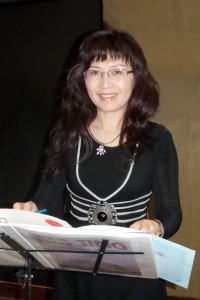 Introduction to “Song of the Pipa”