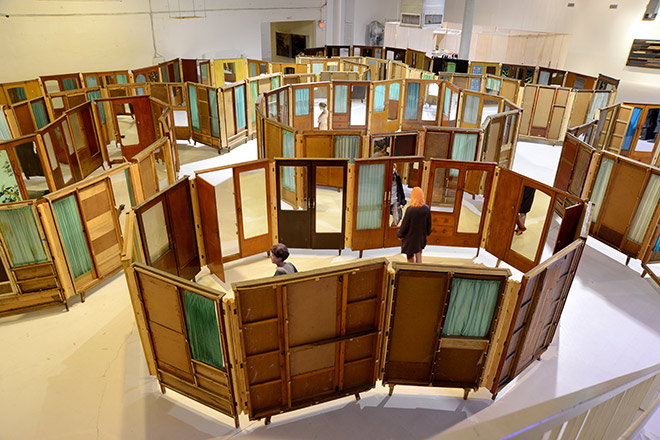 Title: Ancient – Labyrinth – Enigma
Composer: Tony K.T. Leung
Instrumentation: yangqin, erhu, cello, percussion
Programme note: Each wardrobe door of the exhibit leads to untold stories of immense joy and crushing hardship. The placement and arrangement of the doors form a sort of labyrinth, one that reveals and veils. This composition is evocative of ancient resonances, silenced long ago but reinvigorated by our confrontation.

Title: Breathe
Composer: Kenny Kwan
Instrumentation: dizi, yangqin, pipa, cello
Programme note: The idea behind this piece is as the title states: Breathe. Whether it was intentional or not, the current society had developed a general mentality that, in the face of every development, every improvement, every accomplishment that occur, a sense of relaxation and completion should not be felt, but instead interpret them as a sign to encourage even more dedication into development. Though this definitely does have its merits, this mentality also casts aside many important values in the rush for progress. This mentality is especially apparent in the astounding growth in China over the last two decades; many forget that China’s development from a weak developing country into now one of the most influential countries in the world was only a short span of 16 years. But with it growth comes its costs. This piece is a reminder against this societal attitude, as well a direct reference the difference in the quality of air available in China compared to the past due to its growth-based orientation, especially in urbanized areas like Beijing. This piece is intended to provide space to breathe freely, in all aspects for both the listener and performer. Though it may appear uncomfortably slow and disengaging for some, those who continue to listen may begin to find fragmented melodic idioms that are reminiscent of traditional Chinese music. As a final note: To those who are too busy, too occupied with thoughts, too filled with things to do, please take this time to simply listen, relax, and breathe slowly without a rush.

Title: Lullaby 1
Composer: Patty Chan
Instrumentation: erhu, cello, voice
Programme notes: As Song Dong’s Communal Courtyard offers us a glimpse of changing times in history, Lullaby 1 has taken traditional songs from Northeast China and Lakota (indigenous people of the Great Plains of North America) and weaved them together. These songs have been passed from caregiver to child for generations. Though the world has drastically changed, these soothing melodies of old have been preserved. Lullabies are common in all cultures and we can easily connect through this genre of music as it is something we can all recognize and remember. Through art and music, we are able to take elements of our past and share it with others using new interpretations. In this way, no matter how much time has gone by or how far we have traveled, we have something comforting from home.

Title: Intersections
Composer: Matthew Van Driel
Instrumentation: erhu, yangqin, cello, liuqin, zhongruan
Programme note: Taking inspiration from Song Dong’s Communal Courtyard, Intersections begins with a melody based in a traditional Chinese musical form: the pentatonic scale. As the piece progresses, the melody begins to be overtaken by other, more robotic rhythms and phrases. Much like the many cities worldwide where traditional customs, architectures and ways of life are being taken over by our modern day technological society, the ideas in this piece continue to change, influence, and fight with one another, creating both harmonies and dissonances. In the end, the basic form of the original melody is still intact, though it has also adapted and changed into something new – something based in tradition, but influenced by the present.

Patty Chan was born in Toronto, and is the Concertmaster of the Toronto Chinese Orchestra. She has collaborated with many ensembles, including the Orpheus Choir, Dusk Dances, Red Snow Collective, and Tapestry Music Theatre. Patty has appeared on CBC Radio, recorded for the docudrama, “IRIS CHANG: The Rape of Nanking”, and has performed in the 2012 theatre production of “Red Snow” in Toronto and Shanghai. In May 2013, Patty performed in the world premiere of “The Lesson of Da Ji”, which won the Dora Mavor Moore award for “Outstanding New Musical/Opera”. The CD of this opera was released in November 2015. Patty’s composition, “Redemption: The Chan Kol Nidre” for erhu and viola da gamba was recorded and released in September 2015. This composition was selected as one of “Best of Kol Nidre” on the Jewish cultural website, JewPop.

Patty teaches erhu in her private studio, at York University’s Chinese music program (since 2003), and community classes (since 2003). She has given Chinese music workshops in elementary schools and in universities. In 2011, Patty published “Playing Erhu – Bridging the Gap”, the world’s first erhu instruction book in English which has been sold in over 30 countries. Sharing the beauty of music to a new generation and a new audience has always been her passion.

Kenny Kwan is currently a student at Wilfrid Laurier University majoring in music. He is pursuing a Honours Bachelor of Music with a focus in Composition-Improvisation and anticipates graduating in June 2016.

With an interest in improvisation and traditional Chinese music, Kenny had recently placed 2nd runner-up in NUMUS’s Student Curator Contest proposing an East-West improvisational concert where musicians from both cultures can collaborate and explore new possibilities. He is actively involved in both scenes, actively volunteering for NUMUS and in Laurier’s New Music Festival while serving as a percussionist in the Toronto Chinese Orchestra. His ultimate goal to create an environment that would nurture these two scenes and potentially open them into a wider range of audiences in the future.

Tony K.T. Leung is a Toronto based composer whose music has been performed and broadcast in Australia, Belgium, Denmark, France, Hong Kong, Korea, Luxembourg, Ukraine, the USA and Canada by leading contemporary music ensembles. Recordings of works by the composer include CD releases from Luxembourg Sinfonietta, ERMMedia, and Canadian Electroacoustic Community.

Matthew Van Driel is a Canadian composer, orchestrator, arranger and conductor. As a film composer, he has written scores for numerous short films from countries worldwide including Canada, the USA, Vietnam and India. He has also been composing and arranging chamber and concert works which have had premiers in both Canada and Hong Kong.

Matthew began his musical training on the clarinet in the seventh grade, and continued in the following years with the bass clarinet, piano, and Chinese dizi. Matthew developed a love for composing music during high school and would later attend York University from 2008 to 2013 where he earned a B.F.A Specialized Honours in Music. While there, he studied composition under both Mike Cado and David Lidov. It was also during this time when Matthew became acquainted with the Toronto Chinese Orchestra and his interest in Chinese music started to form.