On June 9th, we will presenting the Canadian premiere of “Madam Su Ro” by Korean composer Cecilia Heejeong Kim, a spectacular work for Janggo, Super Janggo, and Chinese orchestra, with sound and visual effects. Dr. Kim and her team will be coming all the way from Korea to collaborate with us! 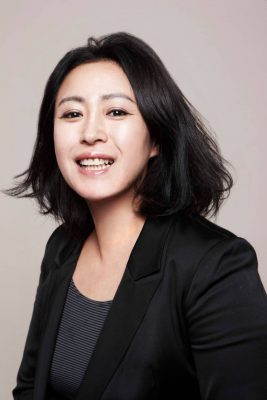 Cecilia Heejeong Kim is one of most innovative composers, active stage director, producer and educators in Korea. Dr. Kim graduated from Yonsei University receiving her bachelor’s degree in musical composition in 1990. Upon her graduation, she moved to Philadelphia where she studied with Joseph Castaldo and began experimenting with multi-media works at the University of the Arts. She received her M.M. and Ph.D. in Music at the University of Pennsylvania where she studied with George Crumb, James Primosch and Richard Wernick. Dr. Kim moved to Boston to do post-doctoral research fellowship at Harvard in 1996.

Dr. Kim’s music has been played world-wide including France, Switzerland, Hungary, New Zealand, Germany, China, Japan, Hong Kong, Thailand and U.S. Her interests cover various fields, which led her to be involved in film productions, multimedia works and modern dances. She has also been working as a broadcasting show-host, lecturer for the TV and festival organizer.

Her recent commissions include from The Cross Sound Music Festival in Alaska, Hong Kong Chinese Orchestra, KAMSA in San Francisco, OperaLab in Australia, Tokyo Gedai Special and Seoul Sinfonia Solisti. Dr. Kim has produced various functional scores such as the title song of 2002 Asian Games and Korean traditional musical theater celebrating the 2002 World Cup Games. Her music has been broadcasted in WNYC in New York, BBC in England, CBS in Canada and CCTV in China and Korean broadcasting channels.

As an active festival organizer, Dr. Kim has served as the executive director of 2003 International Festival of Women in Music Today and CheonAn-Gakwon International Bumeum Music Festival held at prestigious Gakwon Buddhist Temple for few years.

Currently Dr. Kim is a professor at the Department of Composition & New Media at SangMyung University in Seoul, a 2010-2011 visiting fellow at University of London Goldsmith, ICCE (Institute of Creative and Cultural Entrepreneurship) and is serving as a council member of Arts Council, an advisory PR member of Ministry of Foreign Affairs of Korea.

We would like to thank their Organizer: CultureBiz, and Sponsors: Ministry of Culture, Sports and Tourism (Republic of Korea), Arts Council Korea, and Korean Traditional Performing Arts Foundation.