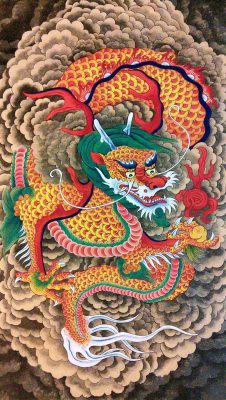 The finale for our June 9, 2019 concert is a Canadian premiere, Madam Su Ro: Concerto for Janggo, Super Janggo and Chinese Orchestra, written by Korean composer Cecilia Heejeong Kim. We are very excited to have Dr. Kim, wHOOL, and her team come join us all the way from Korea! More about that later..

This is the early 8th century legend that inspired the music:

1.During the rule of King Seongdeok, Duke Soon Jeong, the governor of Gangneung province, was having lunch by the sea with his beautiful wife, Madam Su Ro. They were surrounded by steep cliffs and azaleas could be seen blooming along the edges, high above the beach.

2. Madam Su Ro saw the azalea blossoms and asked: “Is there anyone who can pick those beautiful flowers and bring them to me?” But the servants answered: “It is too dangerous to go up those high cliffs – it’s not a place any man can climb.”

3. At this time, an old man who was passing by heard Madam Su Ro and was captivated by her beauty. He climbed the cliffs, picked the flowers and brought them to her. Then he sang to her the mysterious Song of Offering Flowers (獻花歌). No one knew who that old man was.

4. A couple of days passed and once again, Duke Soon Jeong and his wife were eating lunch at the beach. Suddenly, a dragon appeared and dragged Madam Su Ro into the sea. The Duke chased after the dragon but could not save his wife.

5. Then the old man appeared and said: “There is an old proverb that says the words (groans and complaints) of many people can melt even iron. How can the dragon not be afraid of the words of many? Gather your people and let them sing songs while beating rocks by the sea, and you will be able to see your wife again.”

6. The Duke did not believe the old man, but because there was no other solution, he obeyed. Finally, the dragon released Madam Su Ro. As she reappeared, the odd scent of her clothes from the sea was not of this world. She smiled mysteriously and seemed to have enjoyed her adventure.