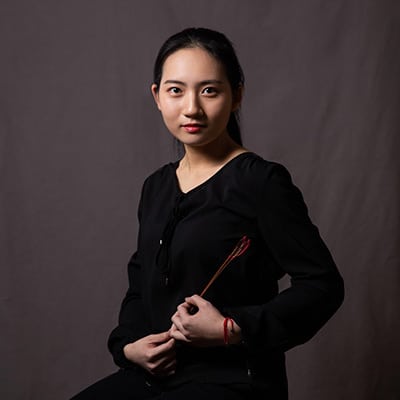 Huiying (Angela) Xu is a yangqin player of the Toronto Chinese Orchestra. Having played the yangqin since the age of 4, she is now an honored student of the talented Mr. Youde Wang. Throughout her musical journey with yangqin, she has surpassed expectations and achieved Level 10 in yangqin performance when she was in 4th grade. With more than 13 years of experience of yangqin performances, Angela has developed a great finesse in her techniques as a yangqin performer.

As the youngest musician at that time, Angela joined the Toronto Chinese Orchestra and Toronto Chinese Chamber Orchestra in her tenth grade. Since then, she has made appearances on WowTV to introduce this unique traditional instrument and share her yangqin experiences as a formidable asset to the orchestra. She continues to inspire young musicians to play the yangqin through her exceptional performances and workshop demonstrations at renowned locations, such as the Royal Ontario Museum. She was also invited to perform for the Chinese Consulate General in Toronto to spread the yangqin culture to Canada.

Angela’s musical interests and training continued to expand to the violin, piano, and cello in recent years. Being a plucked string instrument performer, she has also developed great passion in other traditional Chinese plucked strings instruments, including ruan, pipa, and guzheng after she joined the orchestra. She continues to be a young advocate of Chinese music, spreading diversity throughout Canadian culture with her brilliant performances.

As one of the leading faces in yangqin performance for her generation in Canada, Angela has created access for a younger generation of musicians to view her performances online through her YouTube channel. She has been successful in reproducing music that merges classical instruments with modern undertones of pop-cultural and trendy music.