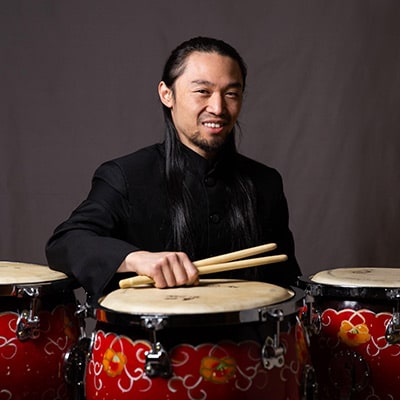 Bobby was first introduced to the drum kit in 2012, and eventually became obsessed with drumming when he began forming his own bands and participating in extra-curricular music ensembles. Since then he decided to supplement his musical horizon by composing and arranging music for percussion ensembles, orchestras, choirs, symphonic bands, and his personal rock bands. Although he has been attending Chinese music concerts since he was a child, Bobby did not become actively involved in Chinese music until 2012. That year he joined the Apex Martial Arts Academy in Toronto to learn wushu and sanshou, not knowing that this is where his journey as a Chinese percussionist would begin. The martial arts school had a drumming ensemble called the Apex Drumming Team, a group of youth that specialized in lion dance drumming.

After witnessing the ferocity of the drumming team through shared community performances with the TCO Bobby was invited to join the TCO not as a performer, but as a composer. He debuted his first composition for Chinese drums, Legend of Jade Dragon, in 2013 with the TCO percussion ensemble. Since then, he has been performing with the TCO and has been appointed the section principal for their percussion section. Bobby’s musical interests have shifted from the Western drum kit to Chinese orchestral and percussion music. He has arranged collaborations between the TCO and the Apex Drumming Team to perform his second composition, Wild Game, and renowned Chinese percussion songs, such as Flying Dragon Leaping Tiger, and Emperor Qin Musters Army. Bobby was invited to Taiwan as a soloist to collaborate with the Taoyuan Chinese Orchestra in the Taoyuan Chinese Music Festival in the summer of 2018.

Despite his obsession with music, Bobby earned his master’s degree in Professional Education, specializing in Applied Behaviour Analysis. In addition to teaching drums part-time, his professional life involves working with individuals diagnosed with autism as a behaviour therapist. Occasionally, these two worlds meet and Bobby welcomes children with autism who want to learn drums.