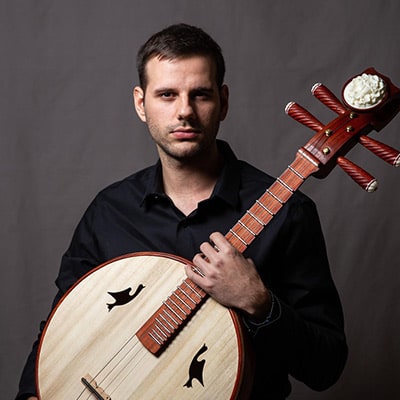 Marko Koumoulas is Greek-Canadian award-winning composer from Brampton, Ontario. Recently completing his Master of Arts in Music Composition, Marko is the creator of the world’s first didgeridoo notation lexicon. Along with his childhood friend and fellow composer, Matthew Chung, Marko started a media music company, ScoreSound, in the spring of 2013. They specialize in writing and recording music for films, tv, and games. Marko’s introduction to Chinese music was in 2014, when he was one of five composers to be selected in a nation-wide call for scores for the Dim Sum Ensemble, in Toronto, Ontario. His original composition, “Reincarnation Suite”, premiered in November 2014. Marko’s return to Chinese music occurred in the spring of 2018 when he re-arranged “Reincarnation Suite” for the Toronto Chinese Orchestra Chamber Players, which was performed in Vancouver, British Columbia. In the summer of 2018, Marko’s piece “Breath” was premiered in Taipei, Taiwan by the Toronto Chinese Orchestra. Later in 2018, Reincarnation Suite was re-arranged once again, for 40-piece orchestra, and performed by the Toronto Chinese Orchestra in Toronto, Ontario. Marko is currently a PhD student at York University, where he is continuing his research on Australian Aboriginal didgeridoo music.

I’ve enjoyed my time playing in the Toronto Chinese Orchestra since I joined in 2018. It’s been rewarding to be a part of an orchestra with such talented and dedicated individuals. It’s been very satisfying to learn and play the zhongruan, as well acquiring a new appreciation for Chinese classical music.