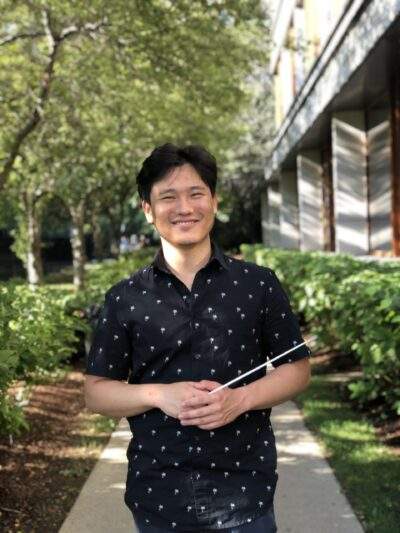 Mike (Zhuo Chong) Liu is a musician based in Toronto. His many musical interests include playing electric and classical guitar, performing tuba, writing songs, as well as conducting ensembles and hosting clinics.

Mike’s conducting journey began in 2017 when he found himself co-conducting the navy cadet band at the HMCS York. Conducting was never a path he considered until the experience thrust itself upon him. This opened the door for Mike to explore the world of conducting and since then, his time has been spent holding regular clinics at various high schools, leading choirs, string ensembles, bands and orchestras around the GTA. Mike was also chosen to be a conducting delegate at the York Conducting Symposium in 2022. His main teachers are Dr. Gillian MacKay and Maestro Uri Mayer of the University of Toronto.

His other musical passions include playing the tuba professionally and, teaching private lessons. As a performer, he has held the post of the principal tuba in the University of Toronto Symphony Orchestra as well as principal Eb tuba in the Hannaford youth band. Mike is currently quite active in the audition circuit and actively tries to perfect the craft of putting wind through a metal pipe. Mike is also a regular member of the University of Toronto tuba-euphonium ensemble and has taught the tuba performance class at the university as well.

Mike currently holds a Bachelor of Music Education with honours from the University of Toronto and is in the process of finishing his studies for his Master of Teaching at OISE. Having spent the last two years online, Mike is extremely enthusiastic to start making music in person again.